Flags In: A Memorial Day Tribute 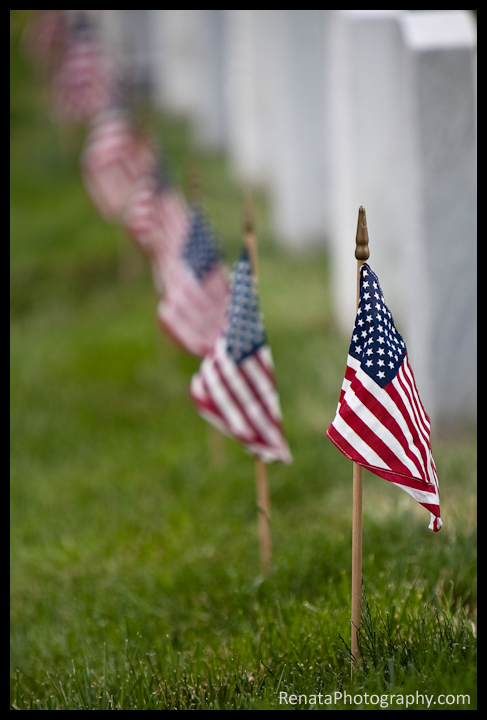 “Flags In” at Arlington National Cemetery  is something I’ve always wanted to see and this year I did.  It is a unique tribute to the fallen where members from the Armed Forces volunteer to place more than 250,000 flags at each grave stone before the Memorial Day weekend.  The whole event only took a few hours and was amazingly poignant.  Many times I was overwhelmed with tears.

Below are some images from the day with individual explanations.  I invite you to share with me this profound experience of gratitude for our service men and women.  I’ll close with a special tribute for a particular young Marine who lost his life 3 years ago this week in Iraq.

Here the soldiers receive instructions on how to place the flags.  The youngest was given the honor of placing the first one.  The camaraderie and awareness for the significance of what they were about to do was palpable. 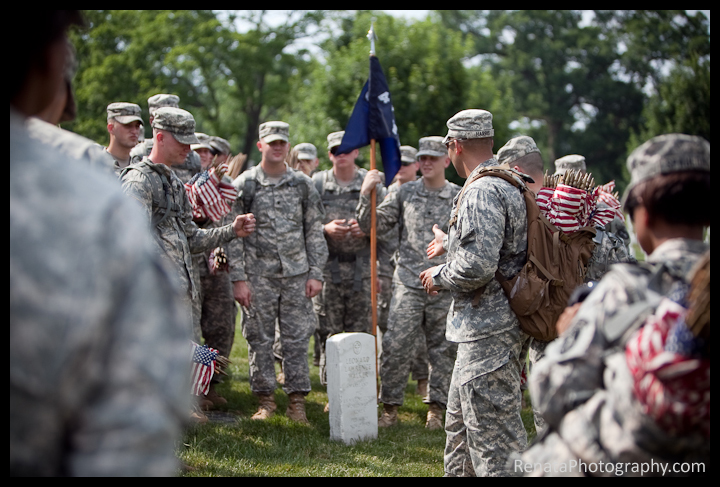 Each flag is carefully measured to be exactly one boot length and centered in front of each grave stone. 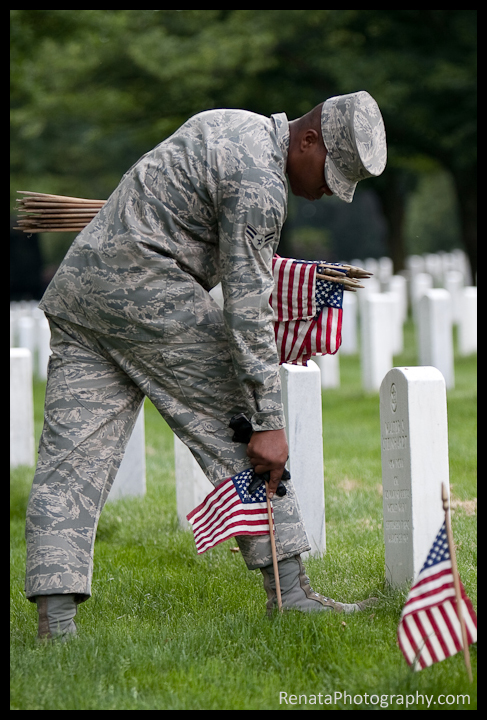 The cemetery looks very dignified as it is “decorated” with flags, recalling the original name for Memorial Day, “Decoration Day.”

I came upon a group of wounded warrior Marines, and became emotionally overwhelmed watching them work through their handicaps while inserting each flag, and then devoutly saluting each veteran’s headstone.

Section 60 is where the latest veterans are buried and the last to be decorated.  Those same Marines I saw came to this area after they were done to visit with their fallen friends.  At this point for me, it became more than paying respect to history but paying respect to those who are still dying for use today.

This image shows a young Marine who moved me beyond words.  He came to visit what must have been his friend’s grave.  After sitting, praying, saluting, over an extended period of time, he reluctantly began to walk away, but then came back again and sat some more.  Then it started to rain.  This image was that moment.  The heaviness of his heart pierced mine.

To end the day I visited the Tomb of the Unknowns.  It is guarded 24/7 by specially trained members of the 3rd United States Infantry (The Old Guard).

On my way out I came upon a small marker dedicated to the Military Chaplains; what an important service they provide.

A Tribute to David

I wanted to close with a tribute to my friend’s brother, Lance Corporal David Paul Lindsey, USMC, who died in Iraq at the age of 20 on May 25th 2007.  It’s hard for me to even write this without welling up because of the emotions it stirs up, but I wanted  to share something of David’s sacrifice to bring home a little more of what we are commemorating this weekend.

At David’s funeral services there were a profusion of photo collages, full of living memories of this incredible family that raised this extraordinary young man.  I’ll share two with you here.

This one of my friend, Natalie, with David, was right before he deployed for Iraq, less than 6 months before he died.  It was the last time she saw her little brother.  In the right corner you see David as a beautiful little boy.

I loved this image also of David with his adoring sisters.

I wanted to close with this image of David’s flag draped coffin and some of his own words from letters he wrote home to his family.  I hope they inspire you as they do me.

From a letter David had sent home on January 30th; after he had been in Iraq 17 days:

“We have been watching Flags of our Fathers. It’s about the Marines on Iwo Jima and the flag-raising on top of the mountain. I tell you where the U.S. troops were outnumbered and had the disadvantage but still went face to face with danger and still took the objective; those men and women are true American heroes (like pops). I know Vietnam was bad, but that didn’t stop Dad. And this is my promise to y’all. Iraq is bad, but it isn’t going to stop me (like father, like son.) I’m out here on the front lines so y’all can sleep in peace tonight.”

From another letter he wrote home during training over Thanksgiving.

“I am down here for y’all and for my friends. I am willing to miss some holidays so other Americans can enjoy them … I will do my best defending America — even if it means with my life.”

A profound thank you to you, David.  I think of you often when I go to sleep because people like you, who gave their all, have made it safe for me to do so.  May you now rest in peace in the loving arms of our Father in heaven.

If you’ve never experienced a funeral service at Arlington, at the link below I have images from a funeral that I photographed with explanations of the iconic elements and traditions used to lay to rest our service men and women.

« A Shower of Roses and the Holy SpiritMemorial Day Weekend 2010 »