Lord, every nation on earth will adore you. 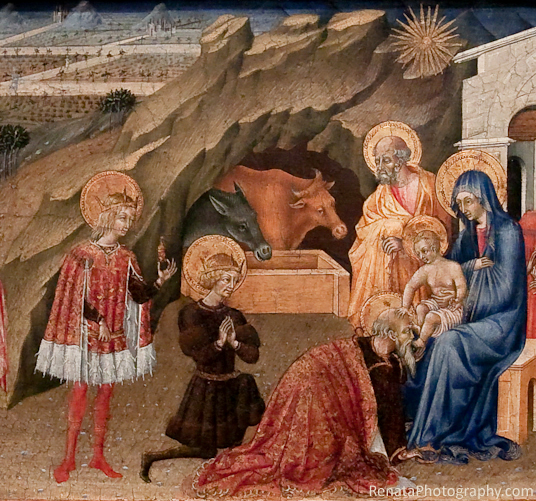 After the celebration of the 12 Days of Christmas, the Church celebrates today the Solemnity of the Epiphany or the manifestation of the infant Messiah to all nations represented by the Magi’s visit to Bethlehem after following a star.

Today’s gospel reading in Rome (where the Solemnity is still celebrated on the 6th of January rather than last Sunday in The United States) recounts the story of how the Magi first went to King Herod to inquire about the birth of this new king of the Jews.

In his homily, Pope Benedict XVI delivered another poetically articulated reflection on these profound events, citing in particular Herod’s reaction to the news and comparing them to our own.  Sadly, all Herod was able to see in the person of this infant King and Messiah was a rival.  A rival to his power, a threat to his freedom, and that threat had to be destroyed at all costs.

We don’t have to dig too deep to see a little bit of Herod in each of us.

If by today’s feast we could try to imitate the Magi, also known as the Wisemen, it would do us all some good.  Let us pause to locate the guiding star that orients and points the way to our King, humbly waiting for us as a defenseless infant.  Not as our rival but as our savior, who brings us true freedom beyond anything this world could give.  Let us be ready to leave behind our comforts, our old ways, to seek Him out, present our broken hearts as gifts, and simply adore Him without reservation or fear.

The Church, in her wisdom, gives us seasons and feasts to give us time set apart for reflection.  In these first 12 days of Christmas, (previously know as Christmastide) we joyfully celebrated the birth of the Messiah, manifested to the local shepherds representing Israel.  The visit of the Wisemen represents the manifestation of the Lord to the World.  This little season, within a season, called Epiphany* is a time to reflect on the manifestations of Christ’s love and purpose for visiting His people.  It would be a good time to also take stock of the manifestations of Christ’s love in our own personal history.

Historically, in works of art, the Magi were represented not only as coming from three different races (often portrayed by the color of their skin), showing the universal scope of salvation by the Messiah, but also as three different ages of man: youth, middle age and old age.  In the detail of the above painting of The Adoration of the Magi (painted by Giovanni Di Paolo Di Grazia hanging now in the National Gallery of Art in DC), we see how the different ages represent the growing wisdom of man as he ages.  The youth is represented as the most distant, and least responsive to meeting the Messiah where by the oldest Magi, the one closest to Christ, is on his knees and kissing the feet of the infant King showing his humility and deference.

Paintings of this time were deliberately didactic in nature because much of the laity could not read, so paintings were a great and accessible tool for meditation.  Even though today so many of us can read, the visual image is still so much more powerful than words, and should not lose its role liturgy and catechesis.  We could even use this painting today to do an examination of conscience with to see where we fit in.  Where are we at in out spiritual wisdom? Do we recognize the Christchild and are not afraid to bow down and worship him as King or do we perhaps resist a little, hang back, are content to watch from a distance while hold on to our self-made crowns?  Pretty powerful stuff when we try to place ourselves in the role of one of the Magi and search our hearts to see who we identify most with.

*In fact, before the reform of the General Roman Missal in the 60’s this now unofficial season of Epiphanytide traditionally went up to the last Christmas themed feast day on February 2nd, the Feast of the Presentation of Jesus in the Temple, also known as the Purification of Mary, marking 40 days after his birth. The new calendar ends the Christmas season with the Baptism of Jesus, celebrated on the first Sunday after Epiphany.  This new calendar saddens me because it shortens the season quite considerably.  The Great Pope John Paul II brought back a sign of this pre-Vatican II tradition by keeping the Nativity scene and Christmas tree in St Peter’s Square and the Paul VI Audience Hall through to Feb 2 (a tradition I happily practice myself ) in order to have more time to focus more deeply on the gift of the Incarnation and how He manifest Himself in our world and personal lives.  It’s always a joy to find parishes locally who have revived this tradition as well, keeping up some, if not all of their Christmas decorations up through Feb 2nd.  Epiphany also has special traditions to help celebrate the season like waiting to place the figures of the Three Wisemen in the nativity scene until today, the Epiphany house blessing with blessed chalk, exchanging gifts today (rather than on Dec 25), and King Cake.  So before you toss your tree out this Christmas, here’s hoping you have a chance to celebrate more deeply the manifestation of the Messiah to all nations and races, discovering the hope He brings of salvation for all.